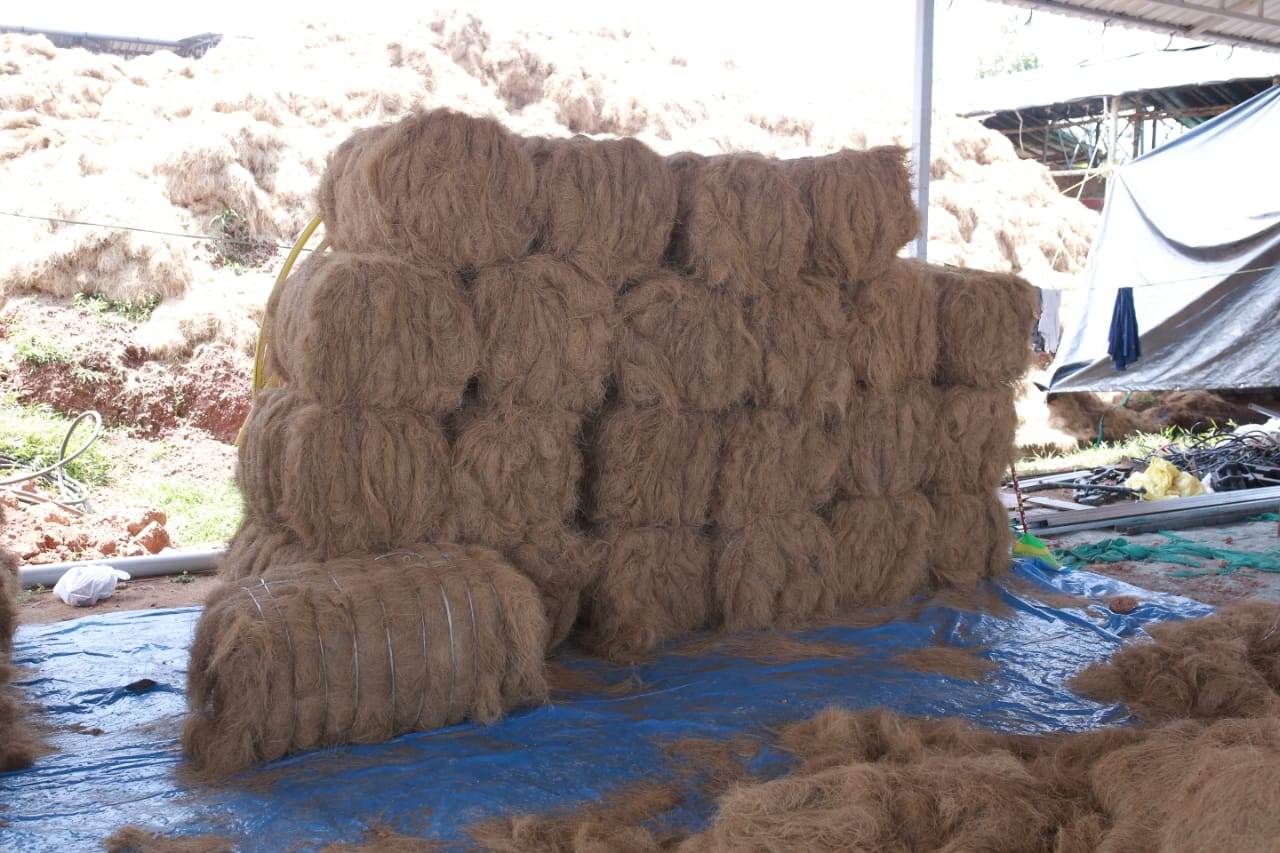 COIR is a versatile natural fibre extracted from mesocarp tissue or husk of the coconut fruit Generally fibre is of a golden colour when cleaned after removing from coconut husk; and hence the name ” The Golden Fibre”.

Coir is the fibrous husk of the coconut shell. Being tough and naturally resistant to seawater, the coir protects the fruit enough to survive months floating on ocean currents to be washed up on a sandy shore where it may sprout and grow into a tree if it has enough freshwater because of all the other nutrients it needs have been carried along with the seed. These characteristics make the fibres quite useful in the floor and outdoor mats, aquarium filters, cordage and rope, and garden mulch.

The individual fibre cells are narrow and hollow, with thick walls made of cellulose. They are pale when immature but later become hardened and yellowed as a layer of lignin, is deposited on their walls. Mature brown coir fibres contain more lignin and less cellulose than fibres such as flax and cotton and so are stronger but less flexible. They are made up of small threads, each less than 0.05 inch (1.3 mm) long and 10 to 20 micrometres in diameter. White fibre is smoother and finer, but also weaker. The coir fibre is relatively waterproof and is the only natural fibre resistant to damage by salt water.

Green coconuts, harvested after about six to twelve months on the plant, contain pliable white fibres. Brown fibre is obtained by harvesting fully mature coconuts when the nutritious layer surrounding the seed is ready to be processed into copra and desiccated coconut. The fibrous layer of the fruit is then separated from the hard shell (manually) by driving the fruit down onto a spike to split it (De-husking). Machines are now available which crush the whole fruit to give the loose fibres.

The fibrous husks are soaked in pits or in nets in a slow moving body of water to swell and soften the fibres. The long bristle fibres are separated from the shorter mattress fibres underneath the skin of the nut, a process known as wet-milling. The mattress fibres are sifted to remove dirt and other rubbish, dried and packed into bales. Some mattress fibre is allowed to retain more moisture so that it retains its elasticity for ‘twisted’ fibre production.The coir fibre is elastic enough to twist without breaking and it holds a curl as though permanently waved. Twisting is done by simply making a rope of the hank of fibre and twisting it using a machine or by hand. The longer bristle fibre is washed in clean water and then dried before being tied into bundles or hunks. It may then be cleaned and ‘hackled’ by steel combs to straighten the fibres and remove any shorter fibre pieces. Coir bristle fibre can also be bleached and dyed to obtain hanks of different colours.

The immature husks are suspended in a river or water-filled pit for up to ten months. During this time micro-organisms break down the plant tissues surrounding the fibres to loosen them – a process known as retting. Segments of the husk are then beaten by hand to separate out the long fibres, which are subsequently dried and cleaned. Cleaned fibre is ready for spinning into yarn using a simple one-handed system or a spinning wheel.

Brown coir is used in brushes, doormats, mattresses and sacking. A small amount is also made into twine. Pads of curled brown coir fibre, made by needle-felting (a machine technique that mats the fibres together) are shaped and cut to fill mattresses and for use in erosion control on river banks and hillsides. A major proportion of brown coir pads are sprayed with rubber latex which bonds the fibres together (rubberized coir) to be used as upholstery padding for the automobile industry in Europe. The material is also used for insulation and packaging. The major use of white coir is in rope manufacture. Mats of woven coir fibre are made from the finer grades of bristle and white fibre using hand or mechanical looms. Coir is recommended as substitute for milled peat moss because it is free of bacteria and fungal spores.

Yucca © 2021 All rights reserved By TriArch